• TRAGIC QUEEN : Former Miss Swaziland 2008 Tiffany Sibong-akonkhe Simelane has died after committing suicide on August 17th. The death of the 21-year-old ex-beauty queen comes exactly 22 days after she relinquished her title to current Miss Swaziland Nompilo Mncina. News of Tiffany’s death began spreading like wildfire from Monday night after her demise was posted on the popular social networking site Facebook. Her death was yesterday confirmed by her uncle, Bongani Eugene Zwane, who said the former Waterford Kamhlaba pupil died while undergoing treatment at the Mbabane Clinic. Zwane could not divulge details regarding the suicide, but unconfirmed reports are that Tiffany took her own life by swallowing weevil tablets. Also, reasons for her to commit suicide remain subject to speculation as the family had no idea what could have influenced her decision to end her life. Even though there was further talk of a suicide note that she left behind, the devastated family could not officially comment on this.

Tiffany's reign will be remembered mostly by the run-ins she had with organisers of the Miss Swaziland Beauty Pageant as she would sometimes disappear without a trace. A week before she stepped down from the throne, Tiffany, in an exclusive interview with the Times Sunday Style section, said she regretted ever being Miss Swaziland. She thanked God that time had come to relinquish the crown, which she said had brought her a lot of stress so much that at some point "I thought I was really going crazy". She described the title as nothing, but a liability to her as she had never benefitted from it. (Times of Swaziland, 8/19/2009)

A national director from another country - who had known Tiffany - wrote to me and said that Tiffany "committed suicide because she was pressured to be one of the 103 wives of the king. The King's law (current) that all Miss Swaziland become his wife." Very intriguing indeed. 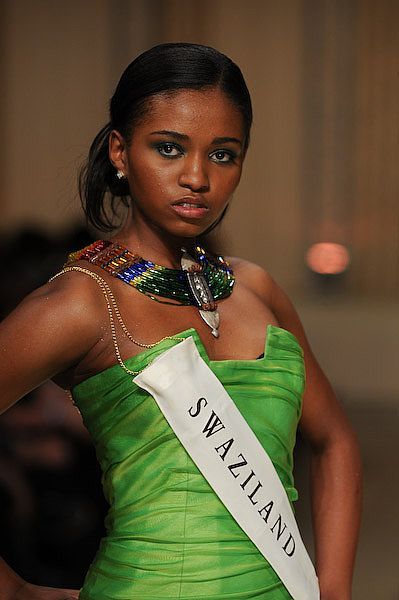 when she competed on Miss World 2008