MICHAELA MALÁÈOVÁ as the owner of CZECH MISS GRABS THE RIVAL COMPETITION - MISS CZECH REPUBLIC AND LEADS BOTH BEAUTY CONTESTS!!!

She just signed the contract with the owner of Miss Czech Republic Central Group. The old management with KUCHAØOVÁ as the president are fired.

MICHAELA MALÁÈOVÁ as the owner of CZECH MISS GRABS THE RIVAL COMPETITION - MISS CZECH REPUBLIC AND LEADS BOTH BEAUTY CONTESTS!!!

She just signed the contract with the owner of Miss Czech Republic Central Group. The old management with KUCHAØOVÁ as the president are fired.

Is it a good,or bad thing for your country? I think it's good,so Czech Republic has only a pageant,where delegates for big international pageants are chosen!

Malacova is very professional and ambitious! I like it! Im curious how the result format will look like

It seems there will be still 2 different pageants. I think it need more time, let´s say one or two years to merge both pageants together.
They promissed to announce more info in june.

nice news lucky..i hope ABS-CBN will owned the franchise of miss universe too in our country

Mee too. The last drop was that terrible Miss Czech-Slovakia show led by Tatana and co. Poor girl, she should have stay as a good model and a former beauty queen.... 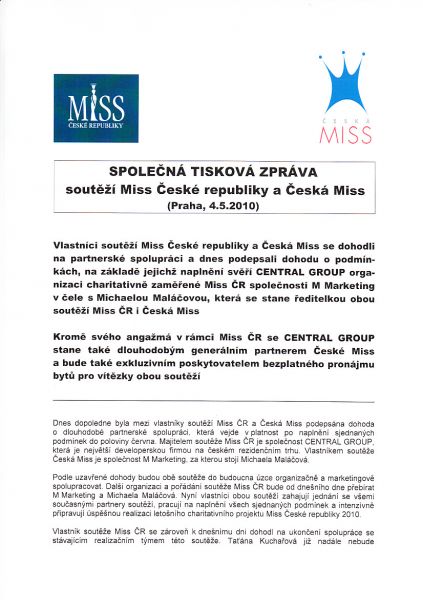 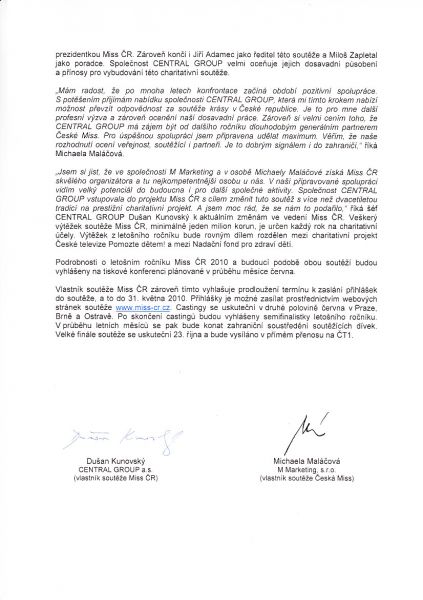 The whole story from www.ceskamiss.cz

4.5. 2010
JOINT PRESS RELEASE of the Miss Ceska Republika and Czech Miss contests
The owners of the Miss Ceska Republika and Czech Miss contests have agreed on partner co-operation and signed an agreement on May 4 about conditions upon the fulfilment of which the CENTRAL GROUP will commend the charity-oriented Miss CR to the company M Marketing headed by Michaela Malacova who will become the director of both the Miss CR and Czech Miss contests.
Apart from its engagement in the Miss CR contest, the CENTRAL GROUP will also become a long-term general partner of the Czech Miss and will be also an exclusive provider of free apartment leases for winners of both competitions. In the afternoon on May 4, the owners of the Miss CR and Czech Miss signed an agreement about a long-term partner co-operation which is to come to effect after the agreed conditions are fulfilled by mid-June. The owner of the Miss CR is the company CENTRAL GROUP, the biggest developer company on the Czech real estate market. The owner of the Czech Miss contest is the company M Marketing headed by Michaela Malacova. According to the signed agreement, both competitions will in future tightly co-operate in organisation and marketing. Further organisation and operation of the Miss CR contest will be commended to M Marketing and Michaela Malacova as of May 4. At present, the owners of both competitions are initiating negotiations with all participating partners of the competitions, work on the fulfillment of all agreed conditions and are in intensive preparations for the successful realisation of this year's charity project Miss Ceska Republika 2010. The owner of Miss CR as of May 4 at the same time agreed on the end of co-operation with the existing realisation team of this contest. Tatana Kucharova will no longer be the Miss CR president. Also, Jiri Adamec ceases to be the director of this competition, and Milos Zapletal the consultant. The company CENTRAL GROUP appreciates greatly its hitherto activities in and contributions to the building of this charity competition. "I'm happy that after many years of confrontations, the period of positive co-operation is beginning. I'm delighted to accept the offer of the company CENTRAL GROUP, which is by this step offering me the possibility to become responsible for beauty contests in the Czech Republic. It is another professional challenge for me, and at the same time appreciation of our past work. I also appreciate very much that the CENTRAL GROUP is interested to be the Czech Miss long-term general partner as of the next year of this contest. I'm prepared to do the maximum for successful co-operation. I believe that our decision will be appreciated by the public, contenders and partners as well. It is a good signal towards the abroad too," says Michaela Malacova. "I'm sure that the Miss CR is in the company M Marketing and the person of Michaela Malacova gaining a great organiser and the most competent person in the Czech Republic. In our coming co-operation I see a great potential for the future and for other joint activities. The CENTRAL GROUP company entered the Miss CR project with the aim to change this competition with over a 20-year tradition to a prestigious charity project. And I'm very happy that we have managed to do so," says the CENTRAL GROUP head Dusan Kunovsky as to the present changes in the Miss CR management. Total yields from the Miss CR contest, at least one million CZK, are every year designated for charity purposes. The yields from this year will be equally divided between the charity project of the Czech Television 'Pomozte detem!' (Help the Children!), and the Endowment Fund for the Health of Children. Details about this year's Miss CR 2010 contest and the future form of both competitions will be announced at the press conference planned for the month of June. The owner of the Miss CR in this way also announces that the deadline for applications to the contest is prolonged to May 31, 2010. Applications can be sent via the website of the competition www.miss-cr.cz. Castings will be organised in the second half of June in Prague, Brno and Ostrava. After the castings are finished, the semi-finalists of this year's contests will be announced. During the summer months, there will be a training of the contending girls abroad. The grand finals will be on October 23 and broadcasted live by CT1.

This is not right. The judges know better what Miss Universe is looking for, they should select the MU representative. Let the voters decide about the Miss World rep! But well, this is not in our hands...
_________________
草摩 美晴 - Souma Miharu

This is not right. The judges know better what Miss Universe is looking for, they should select the MU representative. Let the voters decide about the Miss World rep! But well, this is not in our hands...

Actually in Czech Miss the winner and representative for Miss Universe is always voted by people. In fact, that the only one contest will be exist, we don´t know how the other representatives (for Earth and International) will be chosen. It will be a surprise next march