For her, 13 is an unlucky number
By Armin Adina
Philippine Daily Inquirer
First Posted 21:13:00 03/10/2009
Filed Under: Entertainment (general), Awards and Prizes

MANILA, Philippines—If the number 13 is believed to bring bad luck, the contestant bearing that numeral at the Binibining Pilipinas pageant was coincidentally missing on coronation night last Saturday at the Araneta Coliseum.

The candidate, Sandra Inez Seifert, was disqualified two days prior to the event for having posed in the men’s magazine FHM. 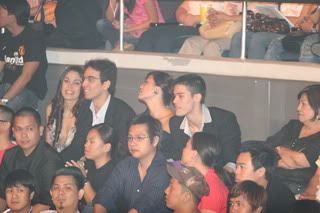 But Seifert was with her family as part of the audience at the Big Dome. “We already have tickets, so we might as well watch,” Seifert told the Philippine Daily Inquirer. “I’m a good sport, they treated me very well [before the disqualification].”

Seifert, a New York-educated registered nurse and former host on the GMA 7 late night program “Walang Tulugan,” was a heavy favorite and touted as a shoo-in for the Bb. Pilipinas-Universe title.

The crown eventually went to Pamela Bianca Manalo, a flight attendant who holds an advertising degree from the Assumption College.

“I was quite surprised,” Seifert said of the results. “But [early on] we were asked who our personal top three choices were, and two of the girls got in — Melody Gersbach and Bianca Manalo. I was the third one [in my pick].” Gersbach was crowned Bb. Pilipinas-International and Manalo, Bb. Pilipinas-Universe.

The 5-foot-8 Filipino-German said her disqualification has opened new doors. “I’ve been asked to join other pageants and show business. I’ve also been asked to join Miss Germany. But I don’t know yet, we’ll see. I’ll just take it one day at a time.”

I wonder if anyone has got the rights for Miss Germany Universe already.......the previous org have dropped their rights and changed the title to Miss Galaxy.
_________________
Gone Baby,Gone