From Wikipedia, the free encyclopedia

Taliana is of Greek descent through her grandparents, and has Italian relatives. She speaks fluent Spanish, English, and Italian, as well as some Greek and Arabic.


Miss Universe 2008
Vargas placed in the Top 5 in the Miss Universe 2008 pageant held in Vietnam, eventually finishing as first runner-up to the winner, Miss Venezuela Dayana Mendoza, on July 14, 2008 (local time). Taliana received the highest scores in both the evening gown and swimsuit competitions. She walked in her wavy gown to which judges awarded a 9.829, one of the highest scores in recent years. In swimsuit, she was awarded 9.433.

Afterwards, Taliana is the 1st runner up and Dayana Mendoza, from Venezuela is the new Miss Universe.

I always loved her body. Best body of all the contestants this year.

I like her as the 1 RU though and I think her gown and swimsuit presantation were the best, but she doesn't have a very pretty face in my opinion...

THE LATEST FROM TALI

more from tali's visit of the colombian embassy in caracas...

Video of Taliana on the Colombian Ambabassy in Caracas:

The Order of San Carlos (Orden de San Carlos) is Colombia's second highest award and was established August 16, 1954, as a reward for services to Colombia, particularly in international relations, by natives or foreigners.

bubbles wrote:Tali receives the Order of San Carlos medal from the President of Colombia

The Order of San Carlos (Orden de San Carlos) is Colombia's second highest award and was established August 16, 1954, as a reward for services to Colombia, particularly in international relations, by natives or foreigners.

^something formal for the occasion... she went overboard with the scarf.

bubbles wrote:^something formal for the occasion... she went overboard with the scarf.

Beautiful smile and fresh face! She definately deserved to be there in the top 2!

nice concept with the dirty pigs and all.......

lol. tali should have worn the pig snout too

well i guess she doesnt want to spoil her image and pose as a dirty pig.... 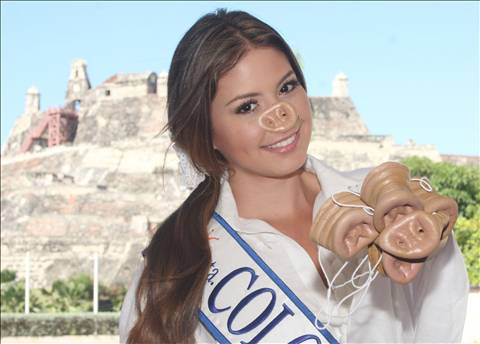 She has a perfect body. I believe if she could make a better answer for her final question, she's certainly the second Miss Universe from Colombia.

If the answer had really meant anything, Mexico wouldn't have been only 4th RU.

You are both true....but hey my opinion the answer ment something....thats why Dayana won and Tali is a runner up. On Mexicos case i dont know what happened...its like they totally ignored her...i dont know...probably they found the answer without inspiration...."when a woman is satisfied"....
_________________
Gone Baby,Gone