The year was 1951. The competition was the first Miss World pageant, introduced as part of the Festival of Britain celebrations, and it was the audience it attracted who guaranteed its success.

The press went to town - the world’s most beautiful women, 26 in all, gathered together in one place and happy to smile at the battery of photographers.

Thanks to founder Eric Morley’s PR expertise, the first Miss World pageant welcomed a global audience greater than international events like the World Cup and the Olympic Games. The BBC televised Miss World from 1959 to 1979 and Thames Television picked up the contract from 1980 to 1988. At its peak, the show claimed an audience of 27.5 million in Britain alone – a figure comparable to that of a royal wedding Fifty years on from the first pageant, Miss World still pulls in the crowds and can boast an annual audience of 2.5 billion.

The first Miss World, Sweden's Kiki Haakonson, was the first and last winner to be actually crowned in a two-piece swimsuit.

During the first decade of the pageant’s success, the outfits of contestants continued to raise eyebrows and grab headlines. In 1959, Loretta Powell of the United States arrived at the House of Commons in London clad in a Stetson, ruffled shirt and cowboy trousers. She may have got away with wearing what at the time was considered a tad outrageous, but she didn’t get away with her ‘guns’. The two stern-faced coppers in charge demanded she hand over her ‘firearms’ - even copies are not allowed in the British Parliament.

In 1966, India enjoyed its first success and Reita Feria proved to be a popular winner. As articulate and charming as she was beautiful, she went on to qualify as a doctor, highly respected for her brains and expertise rather than her looks. The decade finished with Sweden's Eva Ruber Staier winning the title. Later making her name in movies, Eva had a sweet tooth and when asked how she would spend her prize money, told the waiting press that: 'I'll buy lots of chocolate.'

The first Miss World contest of the decade, hosted by the legendary Bob Hope, was marred by feminist protesters. The quick-witted comedian simply shook his head in wonderment and remarked, "Anyone who would try and break up an affair as wonderful as this has got to be some kind of dope."

In that 1970 Miss World, two black women – Jennifer Hosten of Grenada and Pearl Jansen of Africa South – claimed first and second place, something that had never happened before at a major international pageant.

Despite feminist protests, Miss World was achieving monumental television audiences throughout the 1960s and 1970s. In the UK, Miss World 1970 was the single most-watched show of the entire year.

By 1979 the show was topping 500 million viewers world-wide. Gina Swainson won the day, as the little island of Bermuda celebrated her victory by declaring a national holiday.

In 1980, major changes in the Miss World judging process were implemented. For the first time personality and intelligence came into the evaluation and, of equal importance was that vital statistics were no longer deemed vital.

In 1983, the last UK winner of Miss World, Sarah-Jane Hutt, from Poole in Dorset, took the title at The Royal Albert Hall. Three years later, Halle Berry, then Miss USA, stunned the judges and audiences when she wore a bikini featuring stars and ropes of beads during a parade of national costumes. At the time she was quoted as saying that she wanted "to catch the eye from the start." Halle failed to win the contest, but as an Oscar-winning Hollywood star with a string of smash hits under her belt, she almost certainly has recovered from the disappointment.

The decade finished with the first-ever Polish winner Aneta Kreglicka.

The one and only time that Miss World was held in the United States was in 1991 and it was there, in Atlanta, Georgia, that Ninibeth Leal won her crown, before becoming one of Venezuela's most successful models.

The years 1992 to 1995 marked a particularly successful period for the Miss World contest as the finals moved to Sun City, South Africa and viewer figures increased from 1.2 billion to 1.8 billion.

The contestants were welcomed by none other than President Nelson Mandela and over one million people turned out to see them in Johannesburg.

In 1994 Aishwarya Rai became the second Indian winner after a 28 year gap, her win marking the start of a golden age for Indian contestants who took the crown in four out of the next seven years while Aishwarya went on to become Bollywood's biggest female star.

The show's first visit to the Indian continent came in 1996 when over 40,000 people turned out to watch the show at Bangalore's cricket stadium. Irene Skliva won the title of the first-ever Greek Miss World.

In 1999, the show came to London's Olympia. A few protesters turned up to throw flour bombs, but it merely prompted the late Eric Morley to quip, "It's just like the good old days. Who would have thought it would go on for half a century?" Who indeed?

The start of a new century

Miss World reached its half-century in the year 2000 and the contest returned to London, to the Millennium Dome, for the 50th anniversary show. A massive television audience of 2.3 billion witnessed India retain the Miss World crown and in the UK alone more than 8 million people tuned in during the two-hour broadcast on Channel 5.

Miss World 2001, Agbani Darego was the first black African winner and the following year Miss World was staged in her homeland, in Abuja, Nigeria.

The 2007 contest took place in the Crown of Beauty Theatre, Sanya, in the People's Republic of China. The 106 contestants recorded the official torch relay anthem Light the Passion, Share the Dream for the 2008 Olympics Games as a major cooperation between the Beijing Olympic Committee and Miss World Ltd. The song had its first broadcast to a global audience at the 57th Miss World final on December 1 2007, when model Zhang Zilin became Miss World. Zhang was born in 1984, more than thirty years after the start of the Miss World pageant.

With Julia Morley as Chairman, Miss world continues to break records. With franchises in over 120 countries and fundraising topping £150 million, who knows what the rest of this century will bring for Britain's most successful ever international television show. 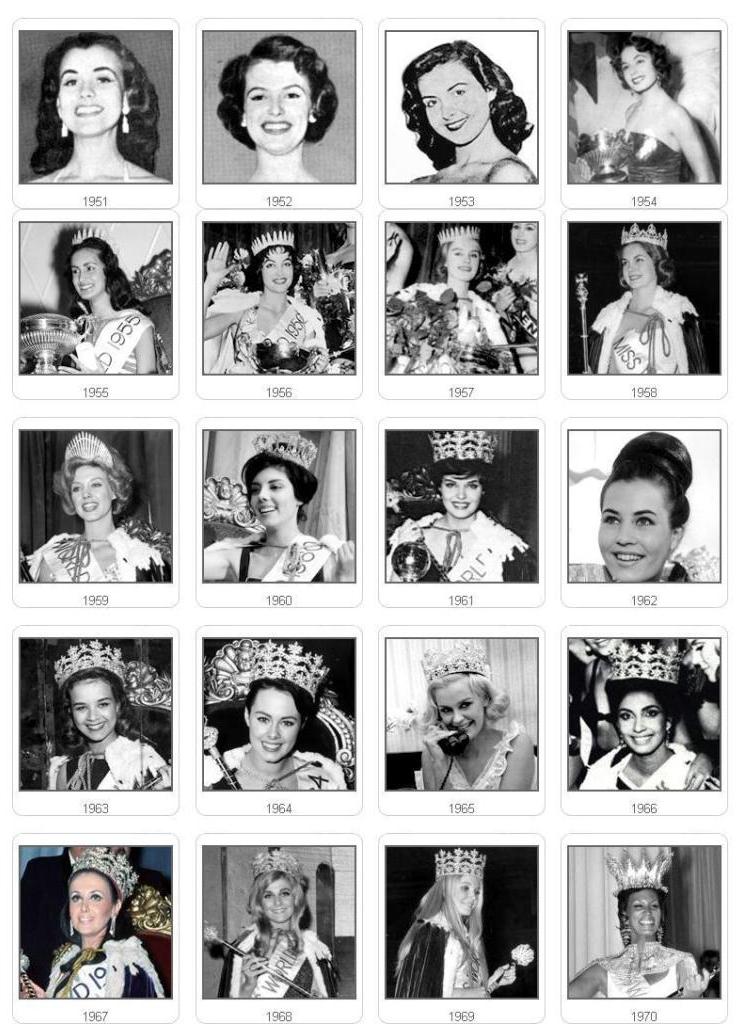 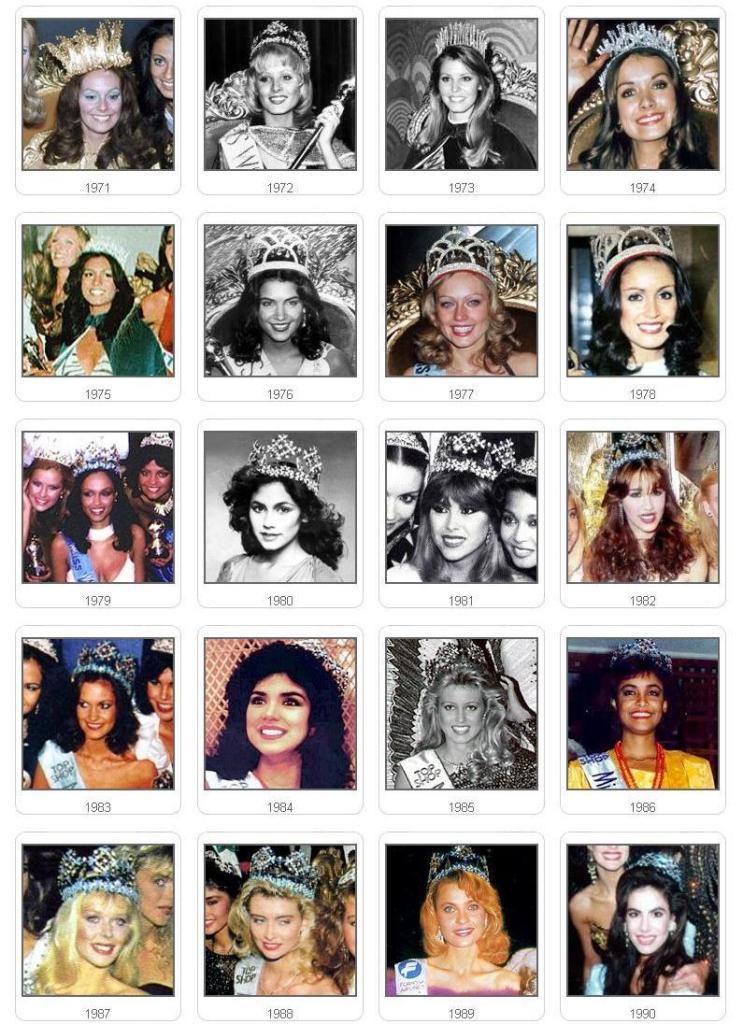 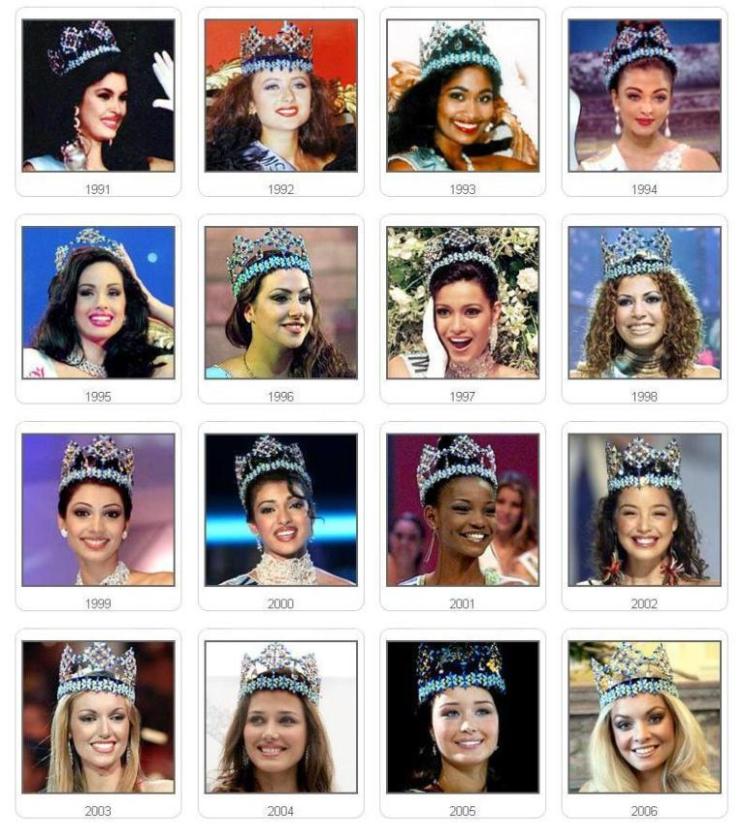 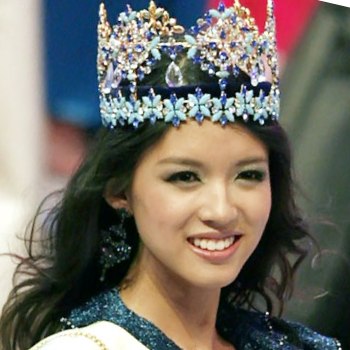 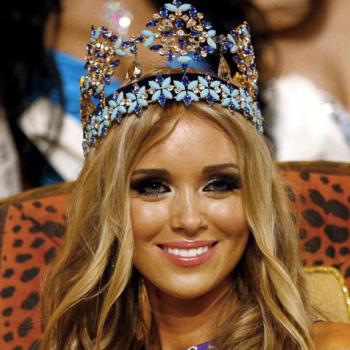 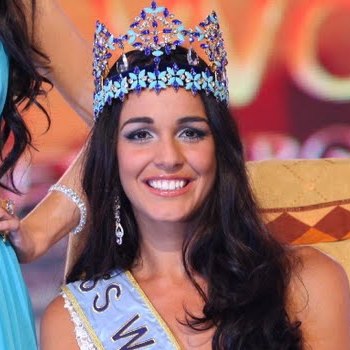 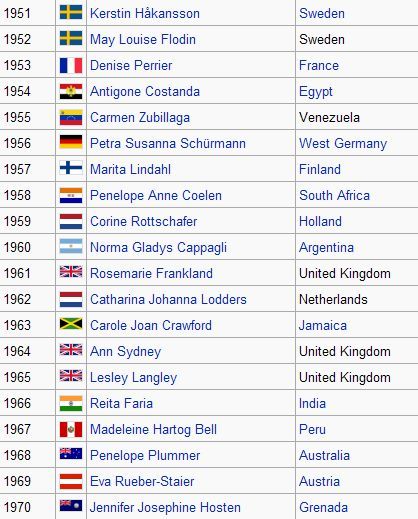 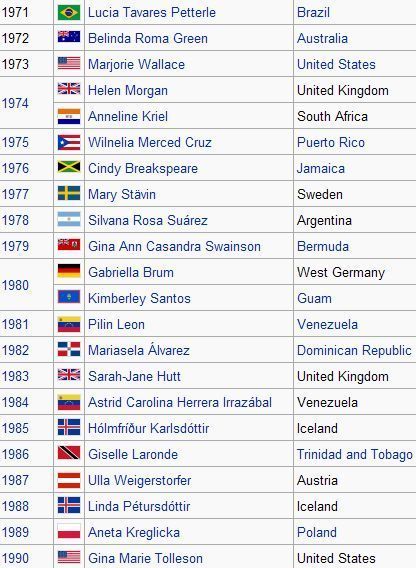 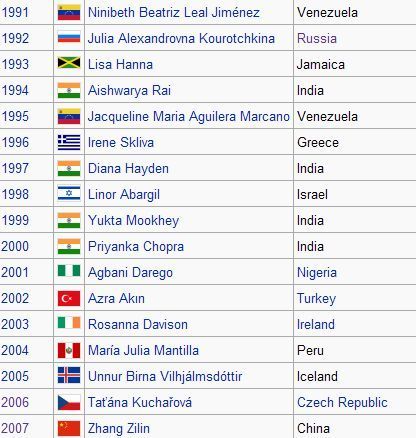 I love the old pics from the 50s and 60s. All this elegance! Is it only me or have we lost this during the years? People talk about natural beauties or sexy ladies, but true divas we only find back in those early years... IMO

My favourite Miss World from the 60s is Lesley Langley. She looks so classy.

I think we love that queens and their pics because they looked like our mothers in that age. Don´t you think?

Veronika wrote:My favourite Miss World from the 60s is Lesley Langley. She looks so classy.

I think we love that queens and their pics because they looked like our mothers in that age. Don´t you think?

My mom was born 55, she's too young. I've always been fascinated by the 50s and 60s, don't know why... Pageants had a different status at this time...

I totally agree with you Del, we lost some of the elegance and class that they had in that years.... the Diva looks are the best for me..... that years were amazing..... now as you said we are fighting between natural of fake beauty but then the girls were so queenly, they were real queens and divas...... hope someday we can recover all that environment on pageants

my friend told me that miss world 1995(Venezuela) is the prettiest Venezuelan he ever seen...

i hope we will have crown also soon

Aish and Rosana are the best looking.

What kind of crown is that, looks like hell....

AMAZING!
MY FAVOURITE, TOO! 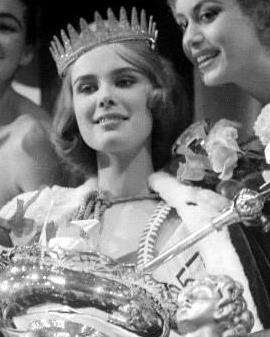 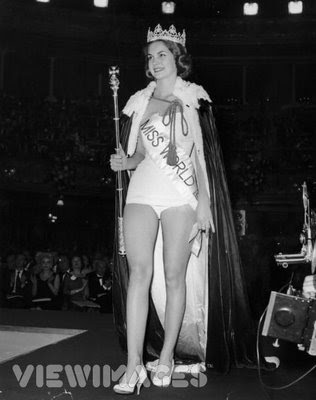