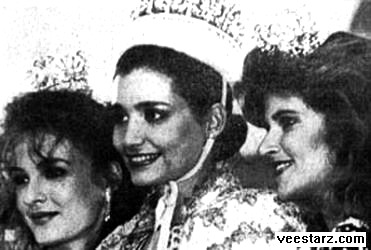 Her father, who died in 2005, was a Spanish emigrant who struggled to provide Nina with education. Nina finally obtained her academic degree in Accounting and aside from that, she also studied piano where she completed her 10 years of piano playing study at the Juan Jose Landaeta Conservatory of Music in Caracas. A lot of people often mistaken Nina to be of Italian descent, but both her parents are actually from Canary Islands, Spain.

Nina Sicilia, representing Monagas in the 1985 Miss Venezuela pageant, captured the Miss Elegance title, and placed as a first runner-up, earning the right to represent her country in a major pageant.
Subsequently Nina went on to compete in Miss International 1985 in Tsukuba, Japan and won the title for her country.

Now she is married with two children. She works in Venevisión as TV Anchor, and as manager in a Caracas marketing company.