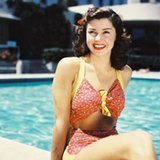 Esther Williams was in a class by herself.

The Olympic hopeful turned leading lady, who utilized her aquatic skills in Technicolor romances such as Bathing Beauty and Neptune's Daughter, died early this morning in her sleep. She was 91.

A champion swimmer as a teen growing up in Los Angeles, Williams was headed for the 1940 Summer Olympics in Tokyo when the outbreak of World War II prompted the Games' cancellation. But it turned out the brunette beauty was destined for stardom in other arenas.

She was discovered swimming alongside Tarzan star Johnny Weismuller as part of Billy Rose's Aquacade show in San Francisco and her career took off in the 1940s when she starred in a series of "aquamusicals," romantic dramedies with lavish sequences of synchronized swimming and diving.

Williams also played Australian swimming star Annette Kellerman in the MGM musical Million Dollar Mermaid, which went on to become the actress' nickname in Hollywood for years to come and the title of her autobiography. The 1952 film was also notable thanks to the off-screen story of an affair between her and costar Victor Mature—which Wiliams admitted to in her book.

So, the stunner's personal life didn't glide along quite as smoothly as her effortless crawl stroke. She was married four times and was with second husband Ben Gage, with whom she had three children, during the time she spent with Mature.

Williams and Gage divorced in 1959 and, 10 years later, she married Latin star Fernando Lamas and was with him until his death in 1982. She is survived by her fourth husband, Edward Bell.

The star retired from acting in the 1960s, but she kept one foot in the pool. Over the years she lent her name to a line of retro swimwear and instructional videos for children, and in 1984 she provided synchronized swimming commentary during the Summer Olympics.

May She Rest in Peace