Alyssa Campanella: The Secret Battle of a Beauty Queen

Alyssa Campanella: The Secret Battle of a Beauty Queen

A Miss USA Speaks: The Secret Battle of a Beauty Queen
By Alyssa Campanella on November 24, 2013 in She Speaks 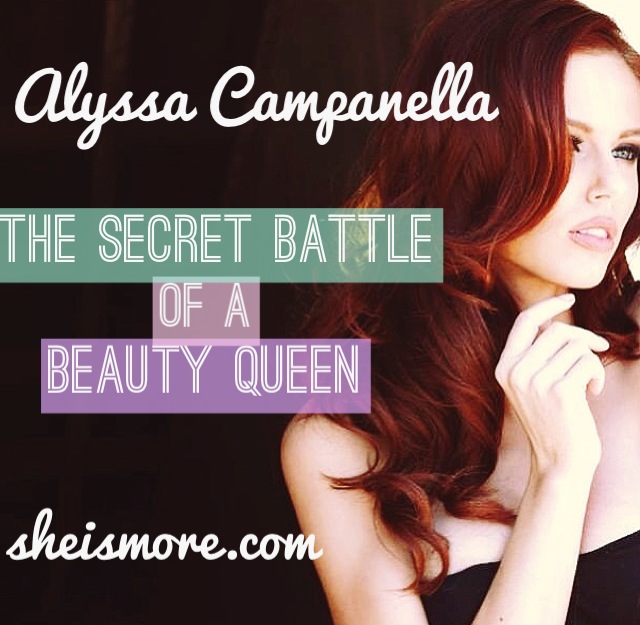 On June 19, 2011, I won the title of Miss USA 2011. This meant I had earned the right to compete at Miss Universe! What an honor! But I had no idea what was about to happen. Being thrust into the spotlight and having a hardcore schedule was not an easy adjustment for me. I began to feel a lot of pressure. Miss USA had not won the Miss Universe crown since 1997, and a lot of people were dubbing me the Miss USA who could finally bring that crown home again. Even though I was so incredibly flattered that I had so much support behind me, the anxiety began to eat me up inside. Was I determined to do well at Miss Universe? Absolutely. USA always does well at Miss Universe. I was not about to let anybody down. But that mentality began to cause trouble. The unexpected stress I began to feel for my new position became overwhelming. My appetite decreased, and sometimes my schedule was so busy that I would miss a breakfast or lunch. I had no idea that it was affecting my body so rapidly and the pounds were just coming off by the minute – NONE of it on purpose, contrary to what people believed. The first time I realized I was in trouble was when one of our talent managers came over to the apartment. She could wrap her fingers around my arm. So I stopped doing cardio and I tried to eat as much as I could before I had to leave for Brazil to try to gain some of the weight back. I was confident it would work.

I was to spend three and a half weeks in Brazil competing for Miss Universe. A few days after registration, the arrival pictures were posted on the Miss Universe website. Everything went downhill from there. My swimsuit picture was being posted all over the Internet, and that’s when it all began. I was now being called “Miss Anorexic USA.” Part of your job as Miss USA is to communicate via social media – Twitter, Facebook, etc. Every day I would log on to my Miss USA twitter account and that’s where I would see all the messages tweeted at me: “Miss USA aka Miss Anorexic USA.” “Look at Miss USA’s legs in her picture! Her thighs can’t even come together because she’s a sickly stick.” “ How could Miss USA even let herself show up like this?” Every day, as we did more and more appearances and more and more photos were posted, the comments kept coming. For any swimsuit photo, I tried to push my belly out to hide any bones from being seen. Most girls suck in their bellies for a swimsuit picture, and here I was trying to make myself at least look bloated to hide my protruding hipbones to diminish some bashing. I even tried posting on Twitter to let everyone know I did not have an eating disorder but that I was just really thin. It went ignored. I was now becoming desperate to appease everyone criticizing me.

At every meal, I went for the fatty foods and carbs. The other girls were eating fruit salads and I was downing chocolate waffles. At lunch I was the only girl digging into the rice, hoping it would make me constipated and keep my weight on. Every night at dinner I asked for an ice cream sundae. But no matter how much I consumed, my body was rejecting the calories and fat. It was physically impossible to gain weight. Then I fell ill with the flu and had to be hospitalized. This was NOT how I pictured the Miss Universe experience would go for me. To top it all off, I was told that because I was so thin, my organs were starting to take nutrients from my heart and could cause me to go into cardiac arrest. Depression and fear sank in. I began to consider myself “the failed Miss USA.” It became difficult to smile. It became difficult to even want to get up each morning. I began counting down the days until I could go home.

In my interview with the preliminary judges, one judge asked me how did I expect to be a role model with my body type? I had answered that I hoped I was a role model for how I apply myself as a person. I want other girls to do the same and acknowledge there is only one of them in this world and that they are beautiful – whether they are obese or thin. Body types can change, but what defines you should not. I’d rather be remembered for who I was than what I looked like.

After the preliminary competition, it just got worse. I specifically chose my evening gown because it hid EVERYTHING – my bony shoulders, my tiny waistline, my ribs, and my stick legs. I thought it would reduce the negative talk about my body. But then for the swimsuit competition, I knew I was damned. The messages kept coming: “I’m embarrassed that you’re my country’s representative.” “You are a complete disappointment. We had such high hopes for you.” “You are NOT a role model for my daughter. How can I let her look up to a Miss USA who thinks this body is healthy?” “What happened to you? You were so beautiful before.” Pictures were now being messaged to me of my face attached on a skeleton’s body. At this point, I did not even want to compete in the telecast. What was the point? I was losing myself. I was not Alyssa anymore.

I did not feel beautiful the night of the Miss Universe telecast, and because I was so thin my hair was a dry, stiff, brittle mess. But to my surprise, I was called into the top 16. I had truly thought I would not make the cut. Of course, the first part of the competition was swimsuit. I kept saying to myself, “Just have the same attitude that you did at Miss USA. Then whip that sarong off and don’t let them see you are afraid,“ I said to myself. So I confidently ripped my sarong off during my swimsuit routine and even the commentators were impressed with my onstage attitude. But I did not make it to the top 10. I cannot say I was surprised at that, though. Was I disappointed? Of course, but I was disappointed in myself not the judges. Even after the pageant, I was STILL facing the wrath of cyber bullies. “You had no business in that top 16.” “You were only put in because you’re USA. You did NOT earn that spot.” Even though I found myself believing them, it still hurt. 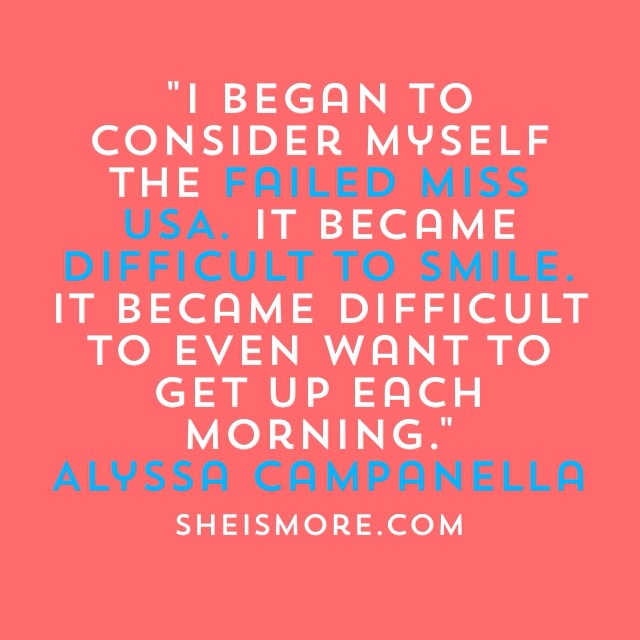 Now, two years later, I am still feeling the effects of what happened to me as Miss USA. Every year when the Miss Universe pageant airs, I die a little inside because I am reminded of what I went through and that I would love nothing more than to redo my entire experience. It’s not healthy. It’s true that every titleholder has her own issues with critics and the occasional bashing throughout her year and I expected that, but I did not expect what I ended up receiving. It had become so severe that I ended up being put in therapy for my depression with weekly visits to a psychiatrist for the remainder of my reign and even after. I also had developed a severe anxiety disorder and severe social anxiety, which I have only recently begun to overcome. I became paranoid of what people thought of me and I couldn’t stay in public for very long before a severe panic attack would ensue. I also refused to wear anything that did not cover my shoulders so I could hide any bones, and to this day seeing me wear anything strapless or with thin straps is very rare. I was terrified that I would only be remembered as the “stick Miss USA” that disappointed everyone. We have only just discovered why I could not gain weight no matter what I ate after a series of medical tests and exams. It turns out there was an underlying problem internally that would never have been discovered had I not had these tests done, and now gaining weight is much easier. I was never anorexic, but the stress I endured only aggravated my condition.

My mom used to tell me the story of a boy whose mother made him hammer a nail into their fence every time he would bully someone, and when he apologized to each person for his actions he could remove a nail. Ultimately, the nails were gone but the holes remained, symbolizing that you can never take words back. I know I was thin but the bullying I suffered did hurt, and bullying can have lasting negative effects. I am a human being, not a robot. The pain I felt was deep and it lingered. However, at the end of the day I have come a long way from all those cruel words. I continued to strive to be a positive role model for young girls across the globe. I was Miss USA, a title that is not easy to achieve. I could have quit the crown entirely and returned home, but then all those bullies would have won. What kind of role model could I have been then? I’d be showing it’s okay to run away, which it isn’t. It has taken me over two years to publicly talk about my story out of considerable apprehension, but I no longer wanted to feel the poison eating away at me inside. I will never be able to get past what happened until I can let it go, and now I feel like I can spread my wings and move forward. I am happy to say that the blissful, positive, and healthy Alyssa Campanella has returned. I have won. 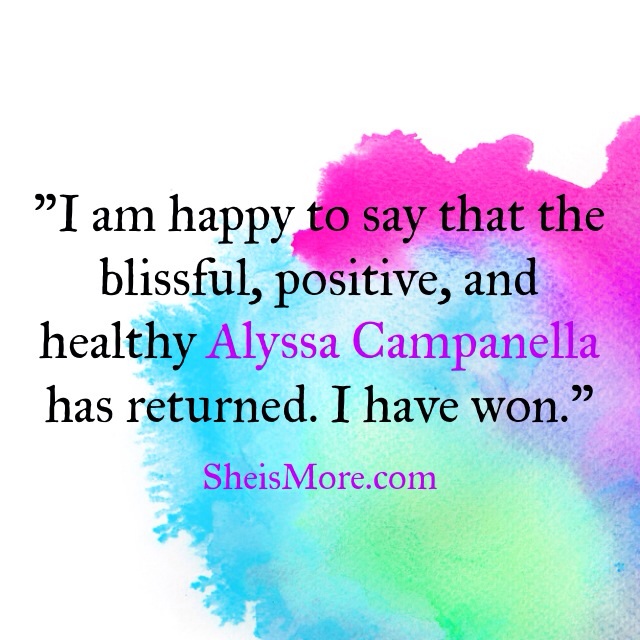 I feel so sorry for her

Her words shocked me. She was really bold, showing the truth. No, a queen no have only "red carpets". She spoke about the "hardcore" agenda - and this remind me what, in the last days, Miss Bahamas and Mauritius spoke about the MU 2013. They did not sleep, like Alyssa did not eat. They had not time.
Rima, also, spoke about after she crowned her successor. "Trump want only job and job, media and media", she said.
Yes, be a beauty queen can be a hardcore experience.

I am glad she is doing better now and wish her the very best. It is curious to find out what the experience is truly like....we make our predictions and comments here and sometimes forget these are real girls with real feelings--and their world is not as glamorous as we would like to think.

Similar topics
» CONTROVERSIAL BEAUTY QUEEN
» Alyssa Campanella (USA 2011)
» A bald beauty queen
» Which Beauty Queen are you?
» Can you guess who this BEAUTY QUEEN is?????