Rachel Renee Smith (born April 18, 1985 in Panama) is an American beauty queen and television personality from Clarksville, Tennessee, who won the Miss USA pageant in 2007 and who previously had competed in the Miss Teen USA pageant.

Smith was born on a U.S. Army base in Panama. She lived in Clarksville after her parents were stationed to Fort Campbell. She is biracial, half African-American and half European-American. She attended Clarksville Academy and graduated from Davidson Academy for high school.
Smith graduated magna cum laude from Belmont University in Nashville, Tennessee in 2006 with a bachelor of science in journalism. Smith graduated a semester early, in December 2006. She received a full tuition scholarship to attend Belmont due to her community service activities and academic achievements throughout high school. While she was at Belmont, she interned in Chicago, Illinois, for eight months with Harpo Productions, a company owned by Oprah Winfrey. In January 2007, it was announced that she had been chosen by Winfrey to volunteer for one month at her Leadership Academy for Girls

Miss Tennessee Teen USA 2002
Smith won her first major pageant title in 2001 when she was crowned Miss Tennessee Teen USA 2002. This was her second attempt at the title, having placed third runner-up to Jessica Myers the previous year. Smith then competed in the nationally televised Miss Teen USA 2002 pageant at South Padre Island, Texas, where she placed in the top ten and won the Miss Photogenic award. Of the semi-finalists, Smith placed tenth in the swimsuit competition and seventh in evening gown, finishing ninth on average. The pageant was won by Vanessa Semrow of Wisconsin.

On October 7, 2006, Smith became the fourth former Miss Tennessee Teen USA to win the Miss Tennessee USA title, following Molly Brown who held the 1984 teen and 1987 Miss titles, Lynnette Cole who held the 1995 teen and 2000 Miss titles and won Miss USA 2000 and Allison Alderson, who held the 1994 teen title and 2002 Miss title. She won the title in a state pageant held at Austin Peay State University in her home town of Clarksville. Her "sister" 2007 titleholder was Macy Erwin of Chattanooga, Miss Tennessee Teen USA 2007.
Smith is one of three delegates who placed in the final six in the Miss Tennessee Teen USA 2002 pageant to later win consecutive Miss Tennessee USA crowns, after Amy Colley won the title in 2005 and Lauren Grissom won it in 2006. A fourth member of that top six was Brittany Swann, who placed second runner-up. One month after Smith won her title, Swann won the Miss Georgia USA 2007 title, and both competed against each other at the Miss USA 2007 pageant. Swann and Smith have the same directors, Greenwood Productions, which produce the Tennessee and Georgia state pageants.

Smith represented Tennessee in the Miss USA 2007 pageant[7] on March 23, 2007, at the Kodak Theatre in Los Angeles, California, where she became the second titleholder from Tennessee to win the Miss USA crown. Smith won both the swimsuit and evening gown competitions with consistently high scores. She was crowned by titleholder Tara Conner alongside whom she competed at Miss Teen USA 2002. Smith is the third consecutive former Miss Teen USA delegate to win the title.
Unusually, Smith won the pageant wearing the same evening gown that she wore to win her state title. She was the first titleholder to win in a non-neutral coloured evening gown since Kelli McCarty also won wearing a red gown in 1991.(2004 Shandi Finessey wore teal, but the bodice was sheer with rhinestone beading) 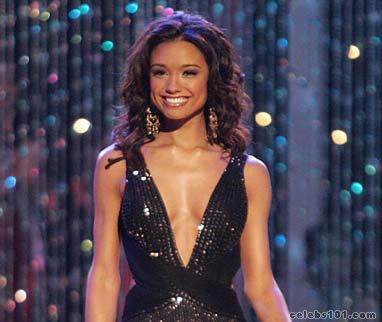 As Miss USA, Smith represented the United States in the Miss Universe 2007 pageant held in Mexico City, Mexico, on May 28, 2007. She arrived in Mexico on May 1, and along with the 77 other delegates participated in weeks of events, rehearsals and preliminary competitions prior to the final telecast.
On May 20, Smith competed in the national costume competition dressed as Elvis Presley, a costume which reflected her home state of Tennessee. During her appearance she was loudly booed by the Mexican crowd, who were seen giving Smith the thumbs-down sign.
After competing in the preliminary competition, Smith made the top 15 during the pageant finals, where she placed sixth in swimsuit and advanced to the top ten. During the evening gown competition, Smith slipped and fell down before quickly getting back onto her feet. She was able to remain composed as she finished her walk, and placed fifth out of the ten delegates despite the fall.
Smith was again booed by the Mexican crowd after she was announced as part of the top five while the local representative from Mexico was not. This continued as Smith answered her final question, finishing by thanking the crowd in Spanish, which finally made the crowd cheer. She eventually placed fourth runner-up, equaling the placement of her predecessor Tara Conner at Miss Universe 2006.
The booing and jeering during the pageant was a repeat of a similar incident during Miss Universe 1993, also held in Mexico City, when Miss USA Kenya Moore was loudly booed. Both women were of black descent competing against Mexican women of white descent. The audience reaction has also been attributed to political issues between the two nations.
In August 2007, Mexican tourism officials apologized for the behavior of the audience and said that Smith is welcome back in Mexico any time. 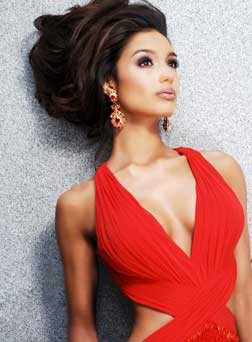 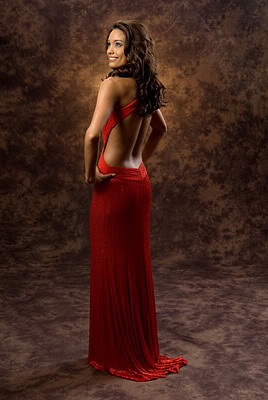 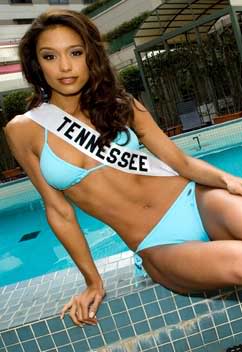 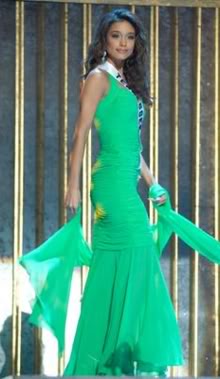 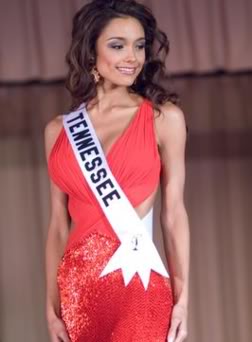 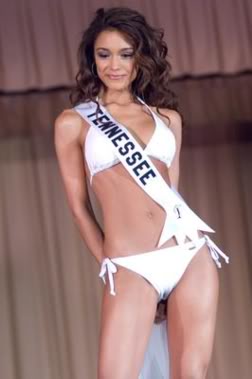 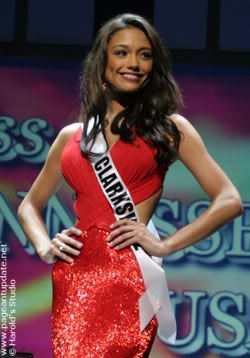 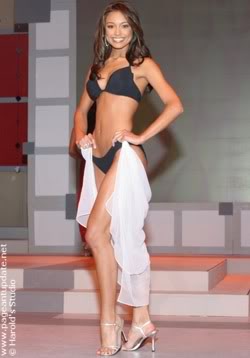 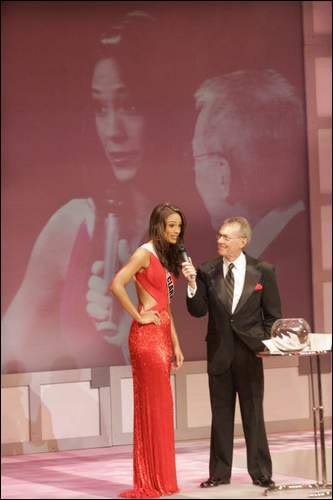 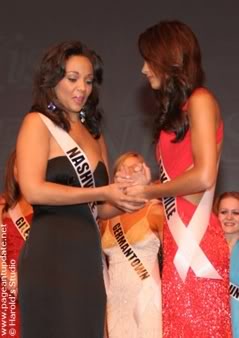 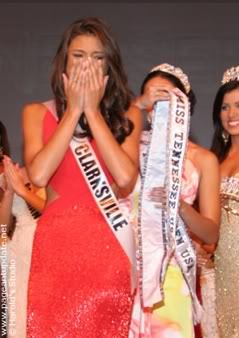 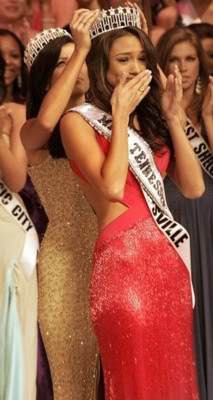 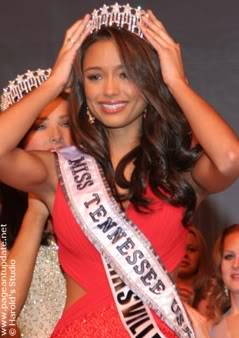 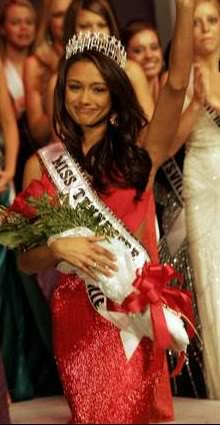 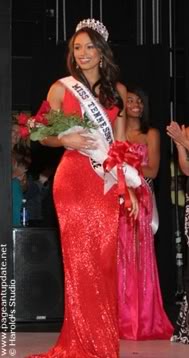 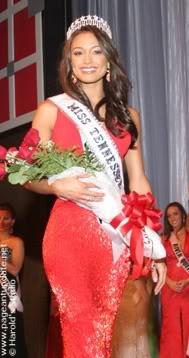 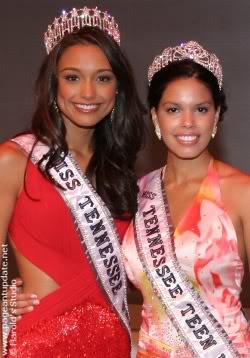 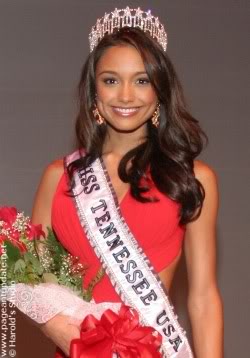 I just made a thread of my favorite Miss USA today

She was not a fav of mine but she did well for herself. She hosts On the Red Carpet now